We had a class trip to the National Print Museum. An exhibition called ‘A World to Win’ was on. In response to that exhibition, we are to create a poster that underlines the theme of protest and revolution.

Here are the posters that caught my eye:

Posters inspired by the Russian Revolution, using illustrations of figures and muted colours with block letters to catch the eye.

I chose to make a poster as a protest against the Irish Naturalisation and Immigration Service. Every year hundreds of immigrants including myself have to queue outside the building to renew our visas. Some queues go all the way  in the street  from Burgh Quay, down Corn Exchange Place and Poolbeg Street, and onto Hawkins Street. From students to families, applicants from around the world arrived to claim one of the highly sought after tickets which would allow them to enter the INIS office and hand over their application papers.

The issue of the length of the queue has been on ongoing source of controversy as immigrants are forced to stand on the street for hours, with some turned away and told to return the following day in the event of the office closing. Imagine standing with your child before dawn during winter and waiting till 9 PM only to be told to return again the next day.

Below is a quote taken from Boards.ie:

In order to obtain a visa to live in Ireland, non-EU citizens have to queue outside the Garda National Immigration Bureau (GNIB) building on Burgh Quay, Dublin. People are now *queueing overnight*, from 8 pm, until 8 am the next morning. This is unacceptable.
It has now been a decade since the first consultation on an Immigration Residency and Protection Bill, but with no reform in sight. The GNIB and INIS have always been inefficient, but the recent scenes outside the GNIB are proof of the failure of successive governments to honor commitments to reform the immigration legislation.
As non-citizens, we are unable to vote. Hence, politicians have been able to ignore this issue with impunity. However, this has turned into a human rights issue. There are pregnant women, mothers and fathers with their babies, their children, old people waiting on the streets for hours, in the cold. This is no way to treat honest, tax-paying residents. It is degrading and humiliating. The level of ignorance and inaction on this issue, is sickening.
We understand that change and innovation in governmental organizations is slow all over the world. All we are asking for, is an online appointment system tool to be integrated into the re-entry visa system. Online Appointment System tools exist all over the world, we’re not asking INIS to re-invent the wheel.
The situation we find ourselves in is beyond contempt, and as tax-payers, we hope for an immediate action by the Irish government

Here is an article from the Irish Times highlighting the issue:

Below are images of the queue: 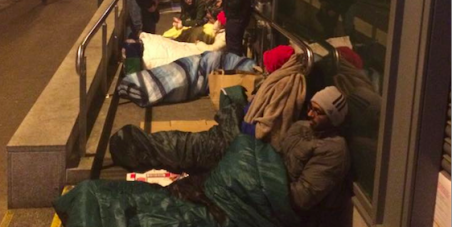 Here’s option 1 of the finished poster using crayons and Adobe Illustrator and Photoshop for text:

Final outcome: Simplified, image and text at the bottom. Illustrations done with pencils.